I talked today with a friend of mine whose dog is ill. Ill to the point where the vet is marking time in months. It’s not impossible that the dog will pull through – they’re doing as much treatment as they can – but my friend and his wife are in the position of having to consider what sort of arrangements they will need to make when the all-but-inevitable happens. It’s a terrible thing to watch someone you love die, be they human or otherwise, and just in emailing back and forth I felt my chest tighten up to remember the pets I’ve lost. If it were within my power to make it not be so, I would do it.

Alas, omnipotence is still ever-so-slightly out of reach.

Of course, talking about this led me to thinking about my own pets, Milo and Cooper, and the fact that one day The Boyfriend and I are going to have to have to deal with the same thing. We have chosen to bring these two short-lived beings into our lives, and part of that responsibility is knowing that we will one day have to see them out. Milo is a pug, with all of the design flaws and general ridiculousness that goes with the breed and shortens its life. Cooper is a carrier of the feline coronavirus, the bug responsible for Feline infectious peritonitis, which is an incurably fatal disease that most recently robbed the internet of its beloved Nyancat.

Being a pet owner means accepting that you will likely outlive your pet. Knowing that, it is so very important to be thankful for the time you have with them.

Milo came first, before The Boyfriend and I moved in together, flown up from a breeder in Kyushu. He really was adorable, as all puppies are, even when he was chewing up every godsdamned thing that was within his reach. And as much as I was warned that pugs were “one-person dogs,” Milo really liked me and got all excited when I came over. We’d go out walking in the park, and the three of us would enjoy the time outside.

When I moved in, Milo was perfectly happy to split his attention between the two of us. I’m the Food Guy, and The Boyfriend is The Walking Guy. Milo loves us both with the wild enthusiasm that only a dog can have, and we’re lucky that he feels the same way about Cooper.

I was in the middle of recording a podcast when The Boyfriend called to tell me he’d met an adorable little black kitten while walking the dog. I came out and met him and the cat, who was sitting very calmly and comfortably nearby. The Boyfriend and I looked at each other and thought, “You know what we need? A cat.” I picked up the kitten, and he let me carry him all the way back home.

As you might expect from a stray cat, there were a whole host of exciting medical bills waiting for us. He had a persistent cold, sneezing constantly and watery-eyed. He was underweight, so we had to wait a while to get him neutered… And then there were the tapeworms.

Once we got all of those dealt with, though, Cooper became the lord of the house (as all cats do), and has grown into an affectionate, social, and fearless cat. He loves to “play” with Milo, which Milo might not always be aware of, and he knows the household schedule like clockwork.

Together, these two make the place just that much better. Sure, Milo makes funny noises and smells weird, and Cooper believes that 4:00 in the morning is a perfectly reasonable time for everyone to get up, but I truly cannot imagine what our home would be like without the two of them.

But I know that that time will come. Eventually we’ll have to see The Boys off, and those will be terribly sad days indeed.

When those days come, and I’m an absolute wreck – and I will be – I will take at least some solace in knowing that all of our lives, human and otherwise, were enriched by being with each other. Together, we had better lives than we would have had apart. They will join Weedle and Poe as companions who will live in my heart for the rest of my life, for whose time on this earth I will always be thankful.

Of course, there’s no reason thankfulness has to wait until then. 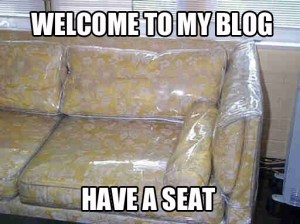 After all the work I did setting this place up, I almost didn’t want to touch it. You know, everything is in its right place and all pretty and stuff, and I had the feeling that whatever I put up next would just detract from its immaculate perfection. I thought my blog might become a museum piece, a gallery of past thoughts that were visible, but unsullied, much like a sofa covered in plastic.

But NO! That’s not how we do things around here, dammit. Blogs are living, breathing, sweating things and they should be made to live, dammit – LIVE, no matter that they’re not always picture-perfect or in tip-top shape. They need to be scuffed, battered and knocked around a bit from time to time so that visitors who come to read it know that there really is someone on the other end who’s just barely keeping up with life, much like Lucy in the chocolate factory. What’s more, the imperfection of the blog should keep the blogger from worrying too much about having perfect content. I mean, sure – I’d like every post to be glimmering with wisdom and philosophical perfection, but as you have probably already guessed, that ain’t always going to happen.

So, how to damage something nice in the cutest possible way? Only one creature in the world knows how to pull that off: Cats.

Meet Cooper. He’s a cat we found as a stray. Well, The Boyfriend found him, and called me out to see if there was anything we could do about this adorable little moppet that may or may not involve bringing him home and adopting him. Which, of course, we did. He had some early veterinary adventures, not the least of which was discovering that he had high levels of feline coronavirus. This nasty little bug could be nothing, or it could lead to painful, unpleasant death. So far, we’re at the “nothing” stage, and I’m doing everything I can to make sure it stays that way.

He’s got an uncanny internal alarm – he knows damn well when feeding time is, and will do his utmost to wake me up at 5 AM regardless of whether or not it’s my day off. The bastard. He feels the need to supervise when I get dressed in the morning. I get out of the shower and there he is, waiting to make sure I don’t eat my socks or wear trash bags for underwear. We finish that off with a little scratch the tummy / bloodletting session, which he enjoys immensely. And if I’m late going to bed at night, he’ll come out and start complaining until I get off the damn computer and get my act together. 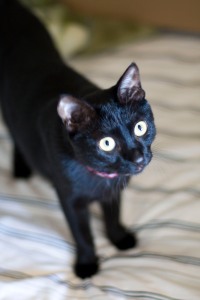 He usually sees me off in the morning, and knows when I come home, running to greet me at the door… and then, for some reason, he tries to escape. This is a new thing with him, and it’s not nearly as adorable as he thinks it is. This might be because we’ve had a couple of Cockroach Events in the apartment recently [1], which seems to have convinced him that there are interesting things outside which must be investigated. Previously, his only experience with outside was vet visits, which really aren’t things that he should want to seek out, thermometers in the butt and all.

He’s probably the most laid-back cat I’ve ever known. Most cats have a “no-touch” policy with certain body parts – feet, belly, perhaps, that little spot right at the base of the tail – but not him. When I clip his nails he just lays there and enjoys it. When I want to rub his belly, he has no problem with it. Unless it’s part of our morning scratchathon ritual, which I see as the price of being a cat owner. But you can pick him up, carry him around and he doesn’t much care. His favorite perch happens to be my shoulders, which actually is as adorable as he thinks it is.

They made me promise this picture would never see the light of day. I lied.

He gets along well with our dog, Milo. If by “get along with” you mean “thinks it’s fun to smack around.” It’s all playing, really, and much like kids playing hide and seek, there’s a safe zone – Milo’s bed is where the game usually stops, so if he makes it there he’s safe. Unless Cooper isn’t finished playing, of course, and then all bets are off. But other times Cooper will groom Milo and occasionally – very occasionally – they end up sleeping in the same place at the same time. I try to get photographic evidence of this when I can.

So, that’s Cooper, a damn fine cat if I do say so myself.

And now the blog has been scratched up a bit, made – like those gorgeous hand-woven Persian rugs – a little less perfect so that it does not mock God Himself. [2] And now that I’ve gotten that out of the way, I can feel a little more relaxed about putting other posts up. Because hell, if I’ve already done a Cat Post, then I can only get better…..

[1] Pretty sure not our fault. The Boyfriend is a meticulous cleaner, which is good because I’m not. But a couple of times now, we’ve had a roach show up, and it drove Cooper nuts.

[2] Stick around, though. There will be God Mockery at some point, I guarantee it.