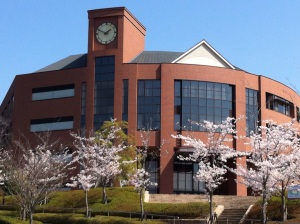 Home away from home…

As with the post about The Boys, I think it is important to be thankful for those things that are fundamentally temporary. [1] If you’ve been reading for a while, then you know that my current employment situation is, how shall we say – in flux, and that this state of uncertainty is not something which sits well with me. Mind you, there are avenues of exploration open that will, if successful, bring this period of uncertainty to a close, but I’m not going to say anything about them until they’re more of a sure thing.

Until then, let me be thankful for my job.

Of all the jobs I’ve had, it is certainly tops in every respect. It’s challenging and interesting, I work with a lot of good people who not only know what they’re doing, but who are willing to go out of their way to help out if necessary. The students are, by and large, hardworking, polite, and conscientious (with the occasional exceptions, of course, but far fewer than might be expected elsewhere). The facilities are modern and nice, the pay is good, and the teachers are given a lot of freedom and leeway to teach as they think best. The only thing I can really complain about is the commute, and that’s just because they’re not willing, for some reason, to move the whole operation down to Osaka.

When I compare it to the other jobs I’ve done and places I’ve worked, I can’t think that I would give this up to go back to any of those.

—–
[1] Which, technically, would include everything, but I only have a few days left on this project.