So I came out to one of my classes yesterday.

It really wasn’t something I expected to do, certainly not in the lesson plan, but when that ball starts rolling there’s really very little chance of stopping it.

Here’s how it worked out: we were practicing some basic can/can’t, could/couldn’t language. We talked about some famous people – Salvador Dali, Albert Einstein, for example – and what they could and couldn’t do as children. Then the students had to ask each other questions – “When could you…?” or “What could you do when you were…?”

This question, or some variant of it, comes up from time to time, and I first correct the grammar – “When could you get married?” – and then tell them that I’m not married. This is usually followed by “Eh? But… Ring! Ring!” They point to the ring I wear on my left hand, given to me by The Boyfriend a few years ago.

And this is where the dilemma starts. I don’t feel comfortable sharing that part of my life with my students. Approaching that boundary between the teacher/student relationship and the human being/human being relationship is awkward to me, and I would rather preserve the distance in order to do my job better. I know other teachers do it differently, and that’s cool, and I don’t want to be a featureless placeholder to them. I need to be human enough so that they’ll enjoy the class, but not so human as to distract them from what’s going on.

It makes sense in my head. Really. I swear.

At the same time, I can’t lie about it. To do that, to say, “Oh, yes, my wife. She’s lovely. Moving on…” would be an insult to The Boyfriend. I told him, and he was surprised and, I suppose, flattered, even though he would find it hard to do the same thing. With his colleagues, he has chosen to avoid the issue as much as possible, and if that means making a few… embellishments so that they’ll change the topic, then so be it. My overriding sense of honesty, however, won’t let me do that.

As for the students, they probably get lied to enough as it is, and I don’t want to be a part of that if I don’t have to. They’re growing up, and someone has to start treating them like adults, if only in a few small ways. 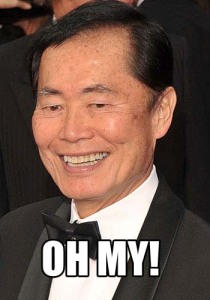 On top of that, there is what I believe to be the ethical responsibility of someone in my position – a gay man with some authority and standing amongst a group of young people who are still developing their moral view of the world. I know that I have a chance to expose them to a gay person, to let them know that we are real people, which may help them be more tolerant and accepting of gay people in their future. What’s more, statistics suggest that there are probably about 50 gay kids in this school, and perhaps knowing that there’s at least one teacher like them will help them get through this tough time in their lives. I don’t expect them to start hovering around my desk from now on, but I hope that, when word gets around – and it will – there’ll be a few gay kids who can at least say, “Well, he’s gay and open about it and doing okay. Maybe I can deal with it too.”

All this shoots through my head, creating a cognitive block so that all I can really do is answer the questions as they are fired at me rather than just open my mouth and explain the whole thing. Am I divorced? No. Is it fashion? No. Is she dead? No. Is it another man’s wife? Hell, no.

Finally, one of the boys asked if it was a woman or a man, and laughed at the ridiculousness of the idea. I told them that was the key question, and that was pretty much that. They asked if I was serious, the girls thought it was the coolest thing in the world, and I had to let them all kind of freak out for a minute before I ended the class. To my relief – but not surprise – no one really got upset as far as I could tell. And the Alphas in the class seemed cool with it, which is the important thing.

Any remnant of a lesson plan that I had was pretty much out the window, so we ended early.

I’m not afraid of anything, certainly – my colleagues all know, and no one has blinked at it. And I think I’ve built up enough of a rapport with my students between last year and this year that even if they have a predisposition against gay people, they may find themselves wondering if they can maintain it against someone they know and like.

It was just a very strange way to end my day, and I figured I’d share.

UPDATE (22 October): The other day, one of the Alphas came up to me as I was preparing the whiteboard for the lesson and said, “Can I ask you something?” And my answer to that is always, of course, Yes. So he stood next to me, and in kind of a stage whisper asked, “Are you… gay?”

Given the above, I figured he’d either forgotten about it or just not taken it seriously at the time. So I said, “Yes I am.”

“Yup.” And I continued writing vocabulary up on the board. He turned around and said to his friends, “Yes.” And that was the last I heard about it.

Until some of the girls asked what my favorite color was, and seemed shocked that it wasn’t rainbow. TV has a lot to answer for.

I wanted to take him aside after class and ask why he asked me, but I didn’t. Somehow I figured that it wasn’t the right question to ask – at least not then and there. So we’ll see how things work out.